Happy Summer Day( Gezuar Diten e Veres)! 14 March is the festival of Dita e Veres in Albania, celebrated mostly in two cities; Elbasan and Dibra. This festive day is a holiday of ancient origine, not known and celebrated elsewhere. This day represents the end of the winter season and the rebirth of nature.The traditional Ballokume, a sugar and corn flour cookie was cooked firstly in Elbasan and spread lately in the whole country. Now this holiday also become national vacation day

Lekursi Castle: The castle was built in 1537 during the ottoman occupation. Is situated on the hill with the same name which is 270 meters high. The word ‘ Lekursi’ is an ancient Greek word which means” lightly place”. Here removed the citizens of Saranda when the city was destroyed by Ostrogoths in the 6th century. From the hilltop of Lekursi the view is amazing. The best place for couples to enjoy a romantic sunset! 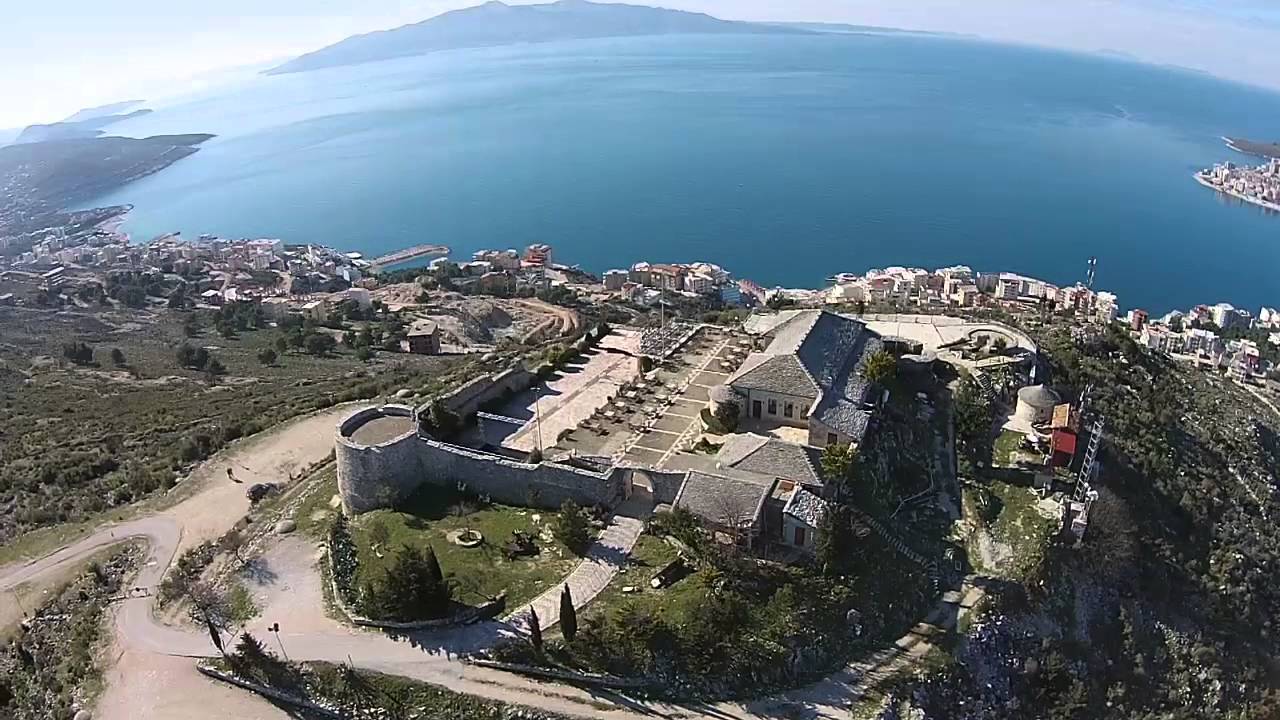 The south of Albania is known for many and different tourist attractions: Its Archaeological sites well preserved, the clear, calm and rocky beaches, several religious objects and natural resources. The main of them is ‘Blue Eye’ considered as a natural phenomenon, one of the springs of Bistrica river.
“Blue Eye”

Being one of the 18 springs is the biggest and the most important among them. It takes out 7.5 cubic meter water i a second, but the divers have not found yet its bottom. Its temperature is 10 degrees celsius. Blue Eye is declared a Rare Natural Treasure and is protected by the Albanian Government. Albanian and foreign visitors go there to relax in the coolness of the clear and vivid water of the spring surrounded by virgin forests.
How to go there: Is 25 km away from Saranda, in the road Saranda- Gjirokastra, 2 km off to the right. It is better to go by car as there are not public buses until the spring. You can take a taxi or if you have a car is much more easier. In case you want to walk take the buses that are at the centre of the city which go to Gjirokastra or other cities that pass by Blue Eye.The ticket is 50 leke per person. For more information contact me!

Taste of Albania: Saganaki with the delicious mussels from the lake of Butrint!

Heat the olive oil i a large pan over a medium heat and sweat the onion and green pepper for 5 min. Add the mussels, cook for about 5 min and add 300gr of fresh tomato passata and feta cheese.
Finally add salt and some black pepper and a 1-2 drops of tabasco. Heat for 1-2 min and serve it in a warm oven.

To not be missed! Enjoy your meal!

In the south of Albania and opposite of Greek island of Corfu is situated one of the archaeological and natural treasures of the country: Butrint. History of Butrint, an ancient port city, is a fragment of the Mediterranean history. Nowdays this ancient city is the most visited cultural tourist destination of the country.

Hidden and forgotten in an abandoned forest until 1928 when the Italian Archeologist Luigi Maria Ugolini disappointed from the ancient city of Foenike undertook the excavations in this site which lasted nearly 10 years. Butrint offers today a remarkable journey through the ages of history, which dates back to 8-th century B.C. The old city retain a unique testimony of Hellenistic, Roman, Byzantine, Venetian and Ottoman cultures and civilizations. .

This city is not considered as one of the biggest ancient cities in Albania. The importance of Butrint is in the presence of different civilizations which can be seen in the well preserved monuments. The combination of the mythology, Archaeology and the nature it makes this small peninsula so unique. Inhabited since the Bronze age by different tribes it grow in importance only in the 4th century B.C. when it was built one of the main temples dedicated to the God of healing, Asclepius. People used to come to his temple to get healed and used to make offerings to the priests and place money into a massive stone moneybox that stands inside of the sanctuary of Asclepius. The Theater of Butrint being well preserved is still in use. Since 2000 in July is held the International Theater Festival of Butrint 2000.

In the 1st century B.C. Julius Caesar designated Butrint a colony to settle veteran soldiers. It remained until 395( when the Roman Empire was divided) under the Romans. This time it has been and the most flourishing period for the history of Butrint. The Romans built their tipicall buildings such as; the Roman Forum, fountains, baths(thermae), villas and an aqueduct which was not used only as a water supply, but as a bridge too. With the split of the Roman Empire Butrint became an early Christian centre. From the Bizantine period of time we have two of the main monuments of the Archeological site of Butrint; the Baptistery which is the second largest of its kind in Mediterranean after the Aghia Sophia in Istanbul built in the same time, in the 5th- 6th centuries A.D. Another Christian building of this time is the Great Basilica

In the late 11th century when it fell into the Norman hands under Robert Guiscard, Butrint remained under the Byzantine Empire. Later on, under the Venetians, the functions attributed to Butrint as a relatively modest centre were basically two: to stand guard over the Corfu Straits and utilise the fisheries. The next ones that took Butrint were the Ottomans. The Turks seized Butrint more than one time. In 1797 the Napoleonic French occupied Butrint as part of Napoleons ambitious expedition to Egypt. French possession of Butrint was short lived, and within a few years later was sized again by the Turks with Ali Pasha as the head. During the Pashas period in Butrint was refortified the Venetian castle on the shores of the Vivari Channel and was built his castle at the mouth of the channel. His main guests have been the writer Lord Byron and the painter Eduard Lear.

The fist to see the importance of Butrint as an archaeological site it was the Italian humanist Ciriaco d’Ancona, who spent Christmas Butrint in 1435. It took a long time until the firet modern excavations.Hidden and forgotten in an abandoned forest until 1928 when the Italian Archaeologist Luigi Maria Ugolini disappointed from the ancient city of Foenike( is another ancient city close to the town of Sarande. We will write a post about Foinike too.) undertook the excavations in this site which lasted nearly 10 years. Since that time on the excavations have taken part many Albanian and foreign archaeologists. It is also the first Albanian site inscribed as e UNESCO site in 1992.
The ancient city has been visited in 1959 by Nikita Khrushchev as e guest communist leader Enver Hoxha. Nikita saw the importance of Butrint as a strategic place for a military base. Unfortunately for Nikita and fortunately for Butrint he broke up with Hoxha and his proposal remained just a plan.

The gigantic eucalyptus trees accompany us on our way to the Agora. Behind them appears the Bay Laurel( the nymph of the ancient times and the perfume of the rich nature) and a little further the olive tree brings the peace in this harmonic combination which only Butrint can offer.

The archeological site of Butrint is open all year round from 8am until dusk.

Admission fees to the archeological site are:
300 leke for Albanian citizens
700 leke for other nationals
500 leke for nationals in groups of 10 and more
children under 8 do not pay

About the visit: The visit it takes 2 hours so you will need to take with you water, sun glasses, appropriate shoes (as the path is a little bit rough), and do not forget the Bug spray, especially if you have children. During the summer the best time to visit Butrint is from 8am-11am in the morning and from 15pm- 18pm in the afternoon. Best months to visit the site are May and September because is not very hot and very crowded and the park is more green.

It is very easy to be reached from the nearest border with Greece, Qafa e Botes which is only 20 km away.The majority of the visitors come from Corfu for a day trip in Saranda. From Saranda to Butrint you can use the public transport, as well. The public bus costs 100 leke and is all day long every hour.

About my tour: I will give you a presentation in an chronological way of the history of the Archeological site in order to have a clear idea of what has happened here from the beginning until today. I will explain the function and the importance of each monument. Being very well preserved it will be easy to turn you back in the different civilizations of this ancient city.  The price for adults is ten euros per person and for kids is five euros. For more information do not hesitate to contact me any time!